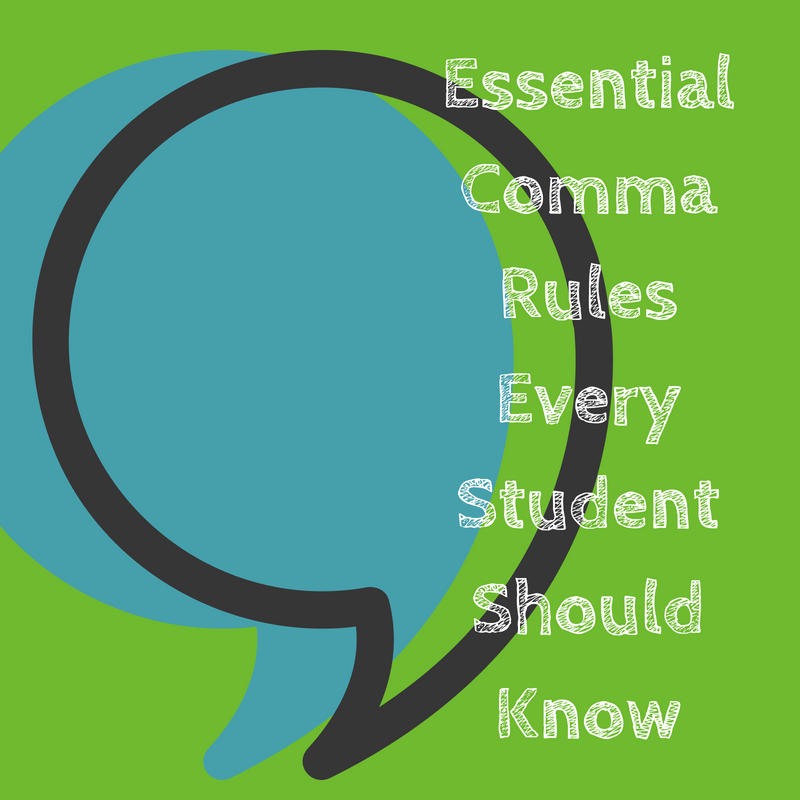 Many people struggle with how to use commas correctly. There are so many rules for so many situations that it becomes difficult not to confuse one with another. In the early years of your education, you may have heard the rule of thumb that you “Put a comma where you would take a breath.” It’s easy enough to remember, but this saying can be problematic since it’s not the only situation in which a comma should be applied, and it assumes your ability to read sentences of any level with the correct cadence. Below are some of the most common comma rules you should know. This is not meant to be a comprehensive list but a guide (primarily for students) to the most common types of comma uses you may come across (especially on tests) that may puzzle you.

This is likely the rule you remember best. Whenever you list items, whether individual items or concepts/phrases, you should put commas in between them. Think of your average grocery store list. If you were communicating to someone what you plan to buy, you might say something along the lines of:

I will buy vegetables, juice, and snacks at the store.

The list items – vegetables, juice, and snacks – are separated by commas. Here’s another example:

Kayla planned to visit the zoo, the museum, and the park on her day off.

You may see that some publications will leave off the last comma – also known as the Oxford comma – because they feel it is unnecessary. This can cause some confusion, however, as items that are not separated by commas are assumed to be related or grouped together. Simply google “Oxford comma mistakes” and you will see many embarrassing mistakes people have made and the consequences that followed. Here’s an example:

A) We invited the dogs, Kaitlyn, and Jake.

B) We invited the dogs, Kaitlyn and Jake.

This is the second rule many people tend to remember. You should put a comma before a conjunction that is used to connect two complete sentences.

Pay extra attention to the words complete sentences. Just because a conjunction appears in the sentence doesn’t mean that a comma should be present as well. There are many reasons why a conjunction may appear in a sentence such as to create a compound subject or predicate. The sentence “Michelle and Emitt walked to the park” does not need a comma before the “and” since “Michelle” is not a complete sentence. To remember which words need a comma before them, remember the acronym FANBOYS.

For
And
Nor
But
Or
Yet
So

Put a comma after non-essential information at the beginning of a sentence.

On her way to the store, Kim saw her friend.

The key part of the sentence above is “Kim saw her friend.” It is not important for us to know that this happened while Kim was on the way to the store, but it is helpful for context. Information like this should be separated from the core of the sentence by a comma.

This rule actually incorporates multiple rules, but the gist is that you should add a comma before and after extra information that appears in the middle of a sentence. Like the rule above, commas act like walls or fences that divide the less important stuff from the essential information. Here are a few examples:

A) Aubrey met her friend, Sarah, at the library.

B) Nick visited the park, a small patch of land in the middle of the neighborhood, on his day off.

C) Amanda drove downtown, where her interview would be held, a few minutes early.

D) Tom cherished the gift, which was from his sister, and kept it with him at all times.

This is a lesser-known rule that students may see from time to time. Put a comma between two consecutive (back-to-back) adjectives that describe the same noun.

Marcus bought a small, metal souvenir from the shop.

You should note that the presence of multiple adjectives doesn’t mean they all describe the same noun. Sometimes, a word that would usually be considered a separate adjective could be further describing an element of one adjective. For example, the words “dark” and “blue” are both ways of describing a noun, but when you call something “dark blue,” you are not considering those qualities as two separate elements. You’re describing a variant of blue. Therefore, the sentence below does not get a comma between the “dark” and “blue.”

Marcus bought a dark blue jacket from the store.

Looking to practice these skills? Check out our essential comma rules practice set. Can’t wrap your head around punctuation rules? Struggling with Language Arts? Give us a call!

Scholarships - Where Do I Start Searching?